The Hoary Record: Flashback to the US Invasion and Conquest of the Philippines (1899 – present)

“Criminals Because They were Born Ten Years Before We Took the Philippines” (New York Journal cartoon caption, May 5, 1902) This refers to the order given by Gen. Jacob Smith, or “Howling Wilderness Smith”, to execute all Filipino persons over the age of ten involved in any way in the resistance against the invading U.S. army.

Howling Wilderness Smith gave full proof of the nobility of the intentions of the invaders when he directed the commanding officer of U.S. Marines in the beleaguered Philippines island of Samar as follows:

“I want no prisoners. I wish you to kill and burn; the more you kill and burn, the better it will please me… The interior of Samar must be made a howling wilderness…”

There were other exotic forms of treatment meted out to the resisting Filipinos, including the infamous “Water Cure”: 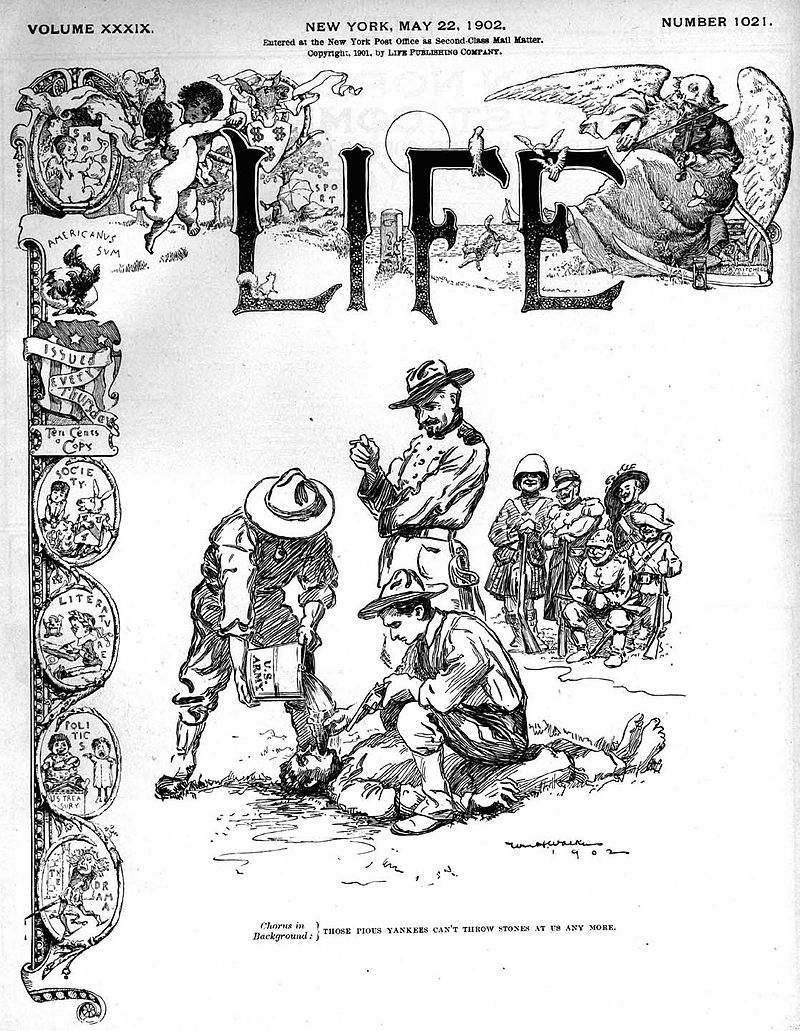 “”Cartoon depicting the application of the “water cure” by United States Army soldiers on a Filipino. In the background soldiers representing various European nations look on smiling. The Europeans say, “Those pious Yankees can’t throw stones at us any more”, meaning that the USA no longer has the moral standing to criticize European colonial practices.” (Cover of Life magazine, Vol. 39, #1021 first published on May 22, 1902) 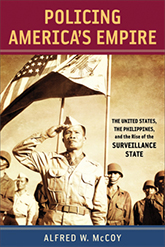 Thanks to the scholarly work of Alfred McCoy, we now know that the U.S. designed and installed highly repressive modern police and intelligence state units as integral parts of its colonial regime in the Philippines, a precursor to the state surveillance system in the U.S. itself (“what goes around comes around”,  or  a case of “the chickens coming home to roost” as Malcolm X would have quipped), and elsewhere in the world, and a legacy which survives to this day in dictator Duterte’s “government” largely responsible for the ongoing murders and human rights abuses committed in the name of a horrendous “war on drugs“.

As Noam Chomsky points out in his review of McCoy’s book:

“This remarkable study provides a meticulous analysis of the novel colonial system developed by the U.S. in the Philippines after the murderous conquest, with startling implications for the shape of the modern world. As McCoy demonstrates, the U.S. occupation developed a major innovation in imperial practice, relying on the ‘information revolution’ of the day to establish intense surveillance and control of the occupied population, along with violence when needed and privileges to obedient elites. This ‘protracted social experiment in the use of police as an instrument of state power’ left a devastating legacy for the Philippines, while also contributing substantially to the modes of suppression of independence and social change elsewhere, and returning home to lay the foundations for a national security and surveillance state.”

We should also take note of the characteristic horrible racist caricature and denigration of Filipinos at home in the US during the period of the invasion and colonization of the Philippines. True to the spirit of imperialism (exemplified in the imperialist discourse of the British empire), the invasion and colonization was justified on grounds of the noble purpose of bringing real culture, religion (Christianity), and civilization to the Filipino “savages”.  Here is an illustrative clipping from the Boston Sunday Globe, March 5, 1899:

A newspaper clipping from the Boston Sunday Globe depicting a Filipino blackface before and after the expansion of the United States to the Philippines. The clipping portrays the transformation of the Filipino from being “barbaric” to a “civilized man”.

As Chomsky observes, in the context of his analysis of different kinds of colonialism, in the informative and insightful interview on “International Relations” in the five-part series “The Chomsky Sessions” (Z Video Productions. February 2010. Interviewer – Michael Albert, co-founder of Z Communications):

“The US invaded the Philippines. It killed a couple of hundred thousand people. It was vicious racism…unbelievable racism. People here weren’t even sure whether the Filipinos were humans or apes. They were exhibited in international fairs and that sort of thing. It was just horrendous when you look back at it.

Of course, all for the most noble reasons…we are uplifting them, Christianizing them, giving them civilization…the usual stuff (of apologetics of imperialism)…There were scattered opponents…not unknown people…like Mark Twain. He wrote very sardonic and cutting anti-imperialist essays. Now, he wasn’t hanged. He didn’t have his brains blown out, but they were suppressed. I think they finally came out around twenty years ago.”

Chomsky goes on to point out that the US conquest of the Philippines led to a “major innovation” in the history of imperialism and colonialism:

“Now what happened after you conquered it (the Philippines)? This has been studied in a really magisterial book, a great book by Alfred McCoy…historian of the Philippines, among other achievements. He is the first person to have studied in detail how they dealt with the population after they pretty much pacified the country.

Well, it turns out that there was a major innovation in imperial history. What was instituted was a very sophisticated high-tech (by the standards of the time) surveillance system…telegraph, radio, other surveillance techniques…every technique was used that was available…to control, monitor, and subdue the population. There were pretty sophisticated techniques of undermining resistance: cooptation of elites, spreading rumors, using every device you have to undermine nationalists, in the background there is the Philippines constabulary, something which happens in every colonial, imperial system. You have a paramilitary force of collaborators which do what you tell them…they are usually trained killers. You can set it up to pick people from one tribe to kill another tribe, or use the rural population to smash the urban population, and in various ways.

This array of techniques was worked out with quite impressive detail and applied in a very sophisticated fashion. It still applies. Philippines is still pretty much under this system. The Philippines which remains a quasi-colony is the only part of East and South East Asia that has not been part of the so-called economic miracle…take a look at Taiwan, South Korea, even Indonesia and so on…there has been a lot of economic development, not the Philippines.

There was immediate blow back. (Woodrow) Wilson and the British during the first world war used a lot of these techniques domestically, consciously. Now it’s extreme. So, you go to Britain. It’s a surveillance society. Cameras in every street corner, allegedly anti-terror devices. Here too…you know, the Patriot Act. And the US applied them (surveillance and control techniques, etc) to other countries right away…Haiti, Dominican Republic, Nicaragua.

Well, that’s another kind of colonialism. Makes a lot more sense than occupying a country. It works much better. It’s cheaper. It can work very effectively. In the Philippines, it’s there for over a hundred years. It develops techniques to apply back home for controlling and subduing the population and so on.” 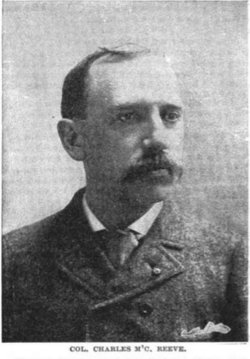 Incidentally, he had served as a Relief Commissioner to Russia during its Great Famine of 1891 – 92. He had accompanied shipments of donated grain from private local groups in Minnesota and Nebraska to alleviate starvation in Russia. 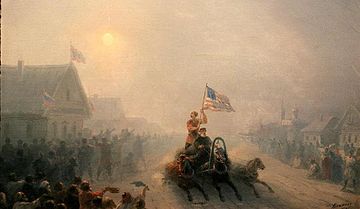 Gen. Reeve pointed out a crucial fact ignored by many news sources at the time, that a day after the start of the U.S. invasion and conquest of Philippines, on February 6, 1899, it was the U.S. commander Gen. Otis who rejected the proposal for truce and negotiations submitted by the Filipino Gen. Torres on behalf of  Emilio Aguinaldo y Famy, the great Filipino revolutionary leader. (Source: The Nation – New York – Thursday, May 4, 1899) 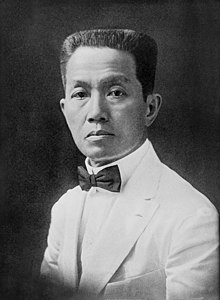 Typical newspaper coverage of the American invasion and conquest of the Philippines – note the characteristic denigration of the Filipino resisters as “savages” and the cannibalistic celebration of their dismemberment by means of the vastly superior weapons of the U.S. army

It was not always a case of “wild rout” achieved by the real monstrous savagery of the invaders. The youthful Filipino general Gregorio Hilario del Pilar y Sempio (1875 – 1899) of the Philippine Revolutionary Army put up a heroic resistance at Tirad Pass against one of the units of the invading American army and facilitated Aguinaldo’s escape: 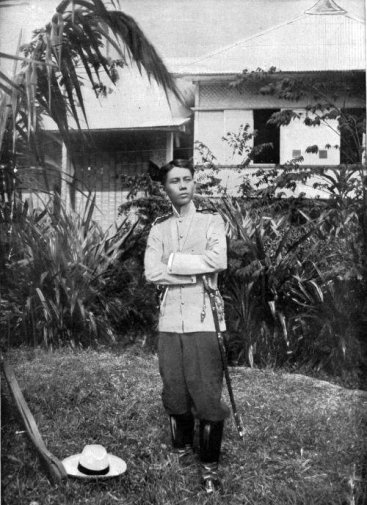 “It was at the peak of the mountain pass in Northern Luzon that 60 Filipino soldiers carried out a heroic stand against American troops in the morning of Dec. 2, 1899, thus enabling President Emilio Aguinaldo to flee towards the “wilds of Lepanto.” Sadly, however, 52 of them including Del Pilar, then 24, perished in what an American war correspondent dramatically termed as a “battle above the clouds.”

From morning till noon he repelled charge after charge, he tenaciously held on with his handful of men through the heat and agony of battle, till he himself fell dead among his slain soldiers. And well chosen and most fitting was the place where he offered the sacrifice of his life. It was on the mountain summit, overlooking the plains and the shores of his country, a massive and tremendous altar, built as it were for Titans, caressed by the rolling clouds of morning, lighted by the stars of dusk.”

U.S. Gen. Charles Reeve’s reference to “these poor wretches” is vividly illustrated in the following two photographs, leaving no doubt as to the identity of those responsible for the condition of the “poor wretches” they had violently subjugated:

“20th Kansas soldiers being met by the Filipinos, Philippines, late 19th or early 20th Century. Notice the white flags being held by the young girl kneeling by the urn and the adult right of the soldiers.” 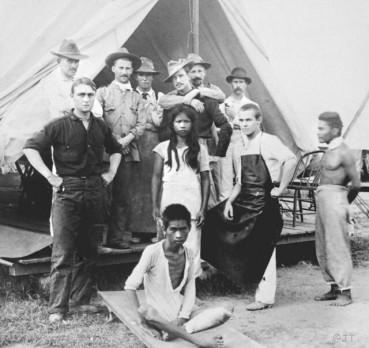 And there was the anti-imperialist Mark Twain’s posthumously published caustic comments on the Moro Massacre of 1906 (falsely described as a “battle” in the annals of U.S. military propaganda), the massacre of Filipino Moro Muslims, including women and children, who did not want to fight and had fled, according to the testimony of Major Hugh Scott who was the governor in the Philippines Sulu province where the massacre occurred, to the volcanic crater of  Bud Dajo:

“”In what way was it a battle? It has no resemblance to a battle … We cleaned up our four days’ work and made it complete by butchering these helpless people…

General Wood (Major General Leonard Wood) was present and looking on. His order had been, “Kill or capture those savages.” Apparently our little army considered that the “or” left them authorized to kill or capture according to taste, and that their taste had remained what it had been for eight years in our army out there–the taste of Christian butchers.”

U.S. soldiers stand proudly with the corpses of the Moros (Filipino Muslims) they massacred in the Philippines in 1906 – as many as a thousand Moros were butchered